Lux Z is becoming one of the most successful show jumpers of his era. Under Italian rider Jerry Smit, Lux Z has had an outstanding career to date including a phenomenal 2000 season when they won the Cannes 2000 Pulsar Crown, earning an extra $800,000 dollars for their efforts. They placed fourth in the Spruce Meadows Du Maurier, the richest show jumping event in the world, placed in the top ten in the World Cup Finals and competed at the Sydney Olympics.

Lux Z is by Lord Calando, sire of additional approved sons, including Lordship and Bavaria Luchs. Lord Calando is a superb example of the Lord and Calando I combination, two of Schleswig-Holstein's top jumping lines. Lord's lifetime progeny earnings exceed 3 million DM and include some of the world's top show jumpers, such as Top Seed (Anne Kursinski), Indeed (Anne Kursinski), Lord Caletto and others.

Lord Calando's dam, Perra, is also the dam of the highly ranked Zangersheide stallion Carthago Z. Perra's dam Kerrin was a successful show jumper in her own right. Her sire Calando I was the 1984 German Champion. As a sire he produced the internationally ranked show jumpers Conejo, Canada's top-ranked show jumper in 2002 under Karen Cudmore.

Lux Z's dam is Apocalypte Z by Ahorn Z, a son of Alme. Ahorn Z is a top progenitor of show jumping talent, having sire of Acord I, ridden by Hap Hansen and sire of America I, Activ and many others. Out of the legendary Heureka Z, a show jumper in her own right, Ahorn Z is a full brother to Argentina Z, dam of two-time Olympic gold medallist and World Champion, Ratina Z. In addition, Argentina Z is the dam of Rebel I Z (sire of grand prix jumpers Ravenna Z and Millcreek Roseanne).

Further back in Lux Z's dam's pedigree we find Caletto I. He is the top-ranked Holsteiner stallion and sire of such greats as Virtual Village Calvaro Z, Opstalan Roofs and Hidden Creek Charmant. In 1983 Caletto I was a team bronze medallist at the European Championships in Hickstead and was the most successful German horse competing in Nations' Cup classes. Caletto I is the full brother to the deceased superstar Caletto II who sired Olympic gold medallist Classic Touch and other greats such as Caretino. 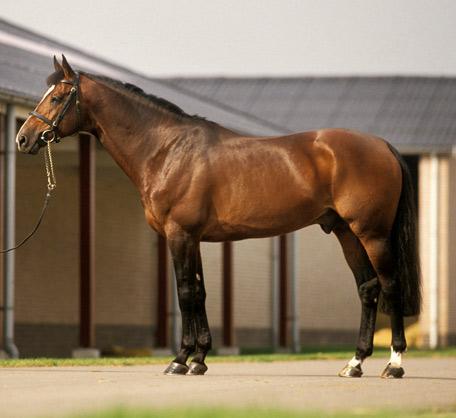