Doree is approved in the SBS and AES studbooks. He has a pedigree that combines the best Dutch, French and German (Holstein and Hanoverian) bloodlines and an exceptionally low inbreeding coefficient: 0.29%, calculated across nine generations, which makes him a safe choice for breeding quality horses.
A top pedigree!

His father: Heartbreaker
DOREE’s pedigree includes at least 4 consecutive internationally recognised stallions, which all excelled at the highest jumping level (CSI 1m60): Heartbreaker, Skippy II, Libero H and Voltaire. These stallions have also proven to be exceptional sires: they all have produced a large number of very talented sport horses.

With a mother and a grandmother who have birthed exceptional horses, DOREE van de Moskifarm belongs to a very successful and vivacious motherline:

GENERAL COMMENTS:
DOREE has an exceptional gallop, combined with an extraordinary back technique. His attractive model and expressive head make him a stallion with an ideal profile for the breeding of modern sport horses. In addition, DOREE has demonstrated great intelligence and a natural and very energetic desire to jump. His riders describe him as a show jumping horse with a strong hip movement, legs of steel and a strong back, in other words, a true sporting horse with all the features a jumper needs.

At age 4, DOREE was approved by the SBS and AES studbooks after a wonderful presentation, ridden by Terry HOECKMAN.

The Belgian and the Dutch stallion approval jury have described DOREE as a true breed improver and a great enrichment to the breeding of jumping horses.

At ages 4, 5, 6 and 7, DOREE easily classified for all the finals of the national jumping competition for young horses in Belgium. From age 8 onwards, he has dedicated himself to CSI throughout Europe: he started in fifty-two 2, 3, 4 and 5 * CSI contests, with very good results and many Clear Rounds, which allowed him to be selected for several Grand Prix, up to the highest level (1m60).

IN 2014
After a serious accident (off-track) suffered by Doree’s rider Perry Geryl, followed by an operation and a long rehabilitation, it was decided to temporarily interrupt the career of DOREE van de Moskifarm as of 1 January 2014. Therefore (and this is really the only positive result of this accident) DOREE can devote himself entirely to breeding.

This very modern stallion suits most mares, even blood mares or mares with a high thoroughbred (XX) percentage. DOREE transmits with 99.9% certitude his extraordinary flexibility and ultra-fast reflexes, along with his power and ability.

He produces foals with all coat colors, some of which are like their father (liver chestnut with silver manes and tail), but also greys, bays and shiny chestnuts.

Since 2012, we can admire his 2, 3, 4, 5, 6 year-old descendants in the arena. The 2 and 3 year-olds have amassed countless victories in free jumping competitions: all of DOREE’s young descendants show an incredible talent, with a special mention for stars like Curby du Seigneur, Corrèze, Dantee, Doofice, Fazoe, Ilaana, Gummy, Fara, Golden Lady, Zizi, Mia Dora, Doree Junior, Nouvelle d’Or, Norah and Natcho.

This year, Curbuy du Seigneur takes his first steps on the international scene, and with success. In early 2014, the stallion, ridden by Jérome GUERY, carried of no less than 6 first places (!!!) in the competitions for 6 year-olds of the Sunshine Tour in Spain.

Dantee started in 2014 in the BWP circuit for 5 year old stallions (in Belgium). After 4 competitions he easily qualified for the grand final (1m20).

Corréze, who turns 6 in 2014, has already made herself noticeable with her clear rounds at her first  BIG CUP 1m25 in Moorsele, Belgium (a competition that lasts 3 days). She will continue to put her exceptional talent on show at international events for 6 year old youngsters.

Ilaana (6 years) drew attention during the national competition in Belgium and is preparing for an international career as a top sport horse.

Doofice made a promising appearance in the Natural Cycle for 5-year-olds in Belgium in 2014. 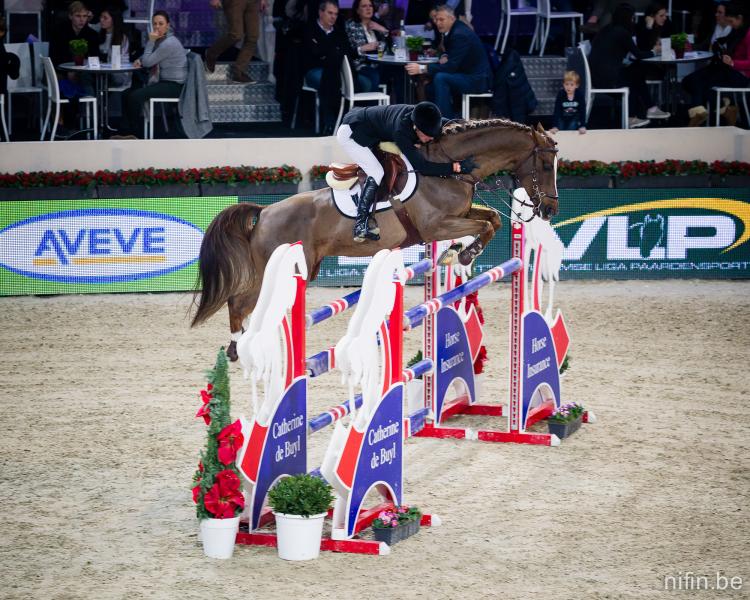