Emilion’s ‘Keur’ IBOP A dam is a daughter of the full sister of the Holstein top sire ‘Lord’. Emilion is just like Lord a producer of jumpers. Directly but also in the dam-line.
Emilion’s own performances are impressive: with U. Kirchhoff he won the World Cup at Mill Street, placed 4th in the Grand Prix Valkenswaard, 2nd in the Grand Prix Donaueschingen, 5th in the Grand Prix London and 6th in the World Cup at Aarhus. With the German Team, he was 4th in Dublin and Rotterdam and 2nd in Bremen.
As a sire Emilion is on his way to become one of world’s best jumper producers. His offspring are performing worldwide in Grand Prix and World Cup classes. One of his most famous offspring probably is Glasgow, who competed for years at the highest International level and won several World Cups and Grand Prix, he won the CN Reliability Grand Prix in Canada three times and was crowned the ‘USA Horse of the Year’.
At the moment VDL Groep Tomboy, VDL Emmerton, SNAI Seldana and Ukinda represent the breeding capacity of Emilion. VDL Groep Tomboy won with E. van der Vleuten the Worldcup Qualifier of London and he won the Grand Prix of Geesteren, Humlikon and Roggel. Recently Tomboy was sold to the stables of Athina Onassis. VDL Emmerton and J. Vrieling won the small final at Valkenswaard and the Grand Prix of Melsomvik, placed 2nd in the Grand Prix of Eindhoven and 3rd in the Grand Prix of Geesteren, 4th in the Grand Prix of Stockholm and Lamprechtshausen. In 2008 he became the Dutch Jumping Champion. Daughter Ukinda is successful with H. Simon, they won the Grand Prix of Offenburg twice, and the Grand Prix of Ising and Vienna. SNAI Seldana won with the Italian Team the Silver Medal at the European Championship in Windsor, in the Nations Cup he was the only horse of the Championship who made a double clear round. SNAI Seldana also won the Grand Prix of Modena, Arezzo, Manerbio and Porto.
Other offspring that are successful at the highest level are: VDL Sarantos, winner GP Amsterdam; Sefana: 6th GP Vejer de la Frontera and 6th GP Belfast; VDL Empire: 3rd GP Kungsbacka; Made in Margot, Exclusive, Tao Tao, Enorm, Inspiration, Fritzy, Jashar, VDL Lotus Exel, Jemilion, Karina, Utopia van het Hoogveld, VDL Nantes, Miss Montana, Lady’s Foal, VDL Edminton, Valdato etc.
Jumpingindex: 135.
Emilion has proven to be one of Worlds best jumper producers.
Use him now while he is still available! 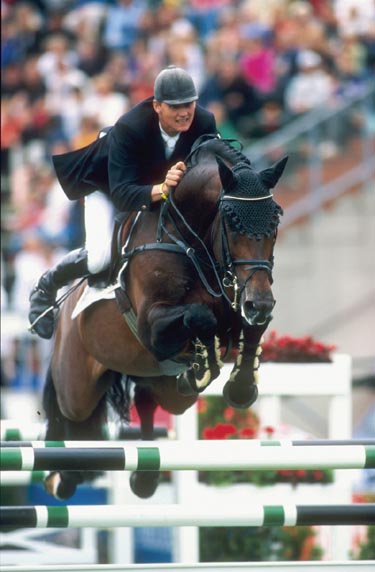